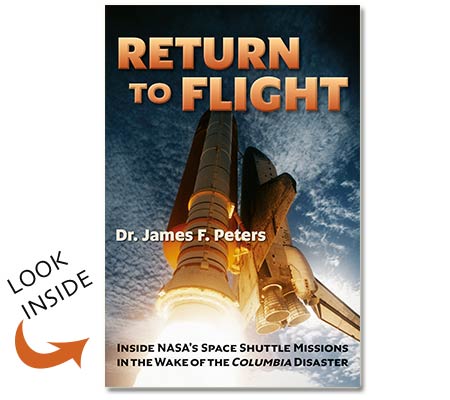 You have seen the movies The Right Stuff and Apollo 13. Perhaps you’ve read some books about the space program, probably one about the Apollo “glory days.” Captivating and inspirational stuff, for sure, and even more so when portrayed on screen by talented actors. But America’s exploration of space didn’t end with the Apollo program. The challenges, the successes, the bravery, and the heroes that we all saw in the Apollo program were multiplied many times in the Shuttle Program. This is the story of the most difficult period in the history of the Shuttle Program, a period of self-doubt, reflection, fear, and anguish, during which astronauts, engineers, and scientists had to work together to ensure a third shuttle disaster would not light up the sky. They had to work together to prove that the destruction of Challenger and Columbia were not in vain. Difficult lessons were learned. Hard decisions were made. This is the story of the people who made them, told by an engineer who was at the center of the Space Shuttle Return to Flight missions.

Return to Flight is a true-life story that involves a historical shuttle disaster that killed seven astronauts. The story describes the passion and dedication from the men and women who, in the wake of the Columbia disaster, supported this nation’s Manned Space Program and strived to make the next Shuttle mission the safest ever flown. It is narrated by Dr. James F. Peters, who served as the Shuttle Debris Integration Chair. He was responsible for correcting the debris problems that led to the Columbia Accident on STS-107 and Returning the Shuttle Fleet to operational flight status. During the first Return to Flight mission, STS-114, he led a large team of NASA engineers and contractors dedicated toward working and solving debris issues. The job delved into the abstract world of probabilistic risk assessment and advanced analytic modeling to determine the safety of flight risk and whether to jeopardize the well-being of the astronaut crew and the Space Shuttle. The very existence of the Shuttle Program hinged in the balance.

The debris team did the difficult and when asked to do the impossible, it just took them a little longer. After the Columbia Accident in February, 2003, debris was identified as the highest risk to the Shuttle Program and remained the number one safety of flight issue for the next eleven flights. Each mission posed its own set of unique debris surprises and the only thing the debris team could count on was the unexpected.

Order a copy of Return to Flight